Sports cards are a visual medium.  This is a fact.  As a visual medium, one would imagine that there would be some importance placed on their visual aesthetics.  Unfortunately this is often not the case.  Sports cards are often hideous, ugly things.  Where good design exists, I appreciate it, though in the way I appreciate good graphic design.  This means I appreciate it for its thoughtful design and it’s ability to visually pleasing.  It does not necessarily mean that I think it is interesting in the way that good art is interesting.  Sports cards, for the most part, do not have any intrinsic value related to their worth as a visual medium.  What I mean by this is that it is rare that someone wants a card strictly based on how it looks.  People generally want cards for one of four reasons: low print run, autograph, memorabilia, or because it is a rookie card.  All of these main reasons to chase cards are completely independent of how the card itself looks, and, in fact, people often chase cards in spite of how they look (see my Gem-sanity post).

While I do chase cards because of who signed them or because they are a rookie (I do not, out of principle, chase low print run cards unless I like it for another reason), I also seek out cards that look cool.  I can often obtain cards that suit my aesthetic sensibilities on the cheap because they often don’t fall into one of the four criteria listed above.  While I appreciate that I can get the cards I want cheap, I also think it is a shame that I can get them so much cheaper than an ugly card which is limited to 50 copies.  We all make a visual medium our hobby, but very few of us appreciate it as art.  While a lot of is not art, we need to hold up the cards which are well-designed to be the standard bearer.  Only if cards can be appreciated based on their design, will the cards themselves ever be intrinsically valuable.  While an autograph or a memorabilia card can be intrinscially valuable becauase of what is on the card a card that is a /50 or even a /1 is not intinsically valuable in any way if no one appreciates it for what is on the front.

That brings me to the topic for today: Left Field Cards.  Left Field Cards are letter press baseball cards, which also double as post cards.  Left Field Cards is operated by Amelie Mancini, who (now I’m stealing from her blog) moved from Paris to New York in 2006 and became a Mets fan (I will forgive her for picking the “other” New York team).  She is an artist who turned her eye to art of cards in 2011.  Left Field has now produced four themed series of baseball cards/post cards.  These series include Bizarre Injuries, Edibile All-Stars, Marvelous Moustaches, and the timely United States of Baseball which feature players who share last names with presidents.  Each series contains ten cards split into two five card packs.

When I first saw her blog, and the cards, I was taken by the art style.  The drawings are simplistic in the right way, they highlight the details perfectly and are interesting on more than one glance.  The colors are bright and vivid.  The cards are interesting and beautiful (an adjective I don’t often use for cards).  They actually looked like art and I knew I must have them.  I decided to make my first Left Field pack Marvelous Moustaches Pack One.  I settled on this because as a bearded person I appreciate good facial hair and because it contains Don Mattingly, who is a beloved Yankee (his moustache is also referred to as the “Magnum” which is separately awesome).

I received my pack earlier this week and although I knew what was in it I was just as excited as I would be for a box where I was chasing something.  I knew immediately that I would not be disappointed because the outer packaging was stamped with the coolest return address I’ve seen in a while (if ever). 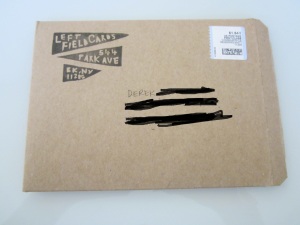 After tearing into the outside envelope, I laid my eyes on the best designed pack that I’ve opened.

The pack itself has a place in my collection, but the cards themselves are the true treasure. 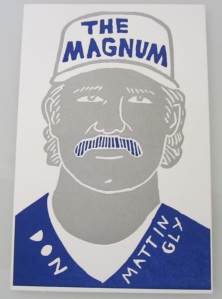 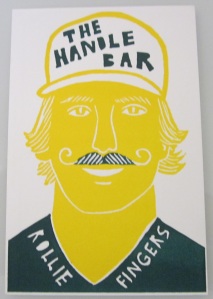 Because they are printed on a letter press, they have a cool texture that doesn’t show up in pictures and it makes for a cool effect.  The cardboard itself is high grade and these just feel like they are of the highest quality.  I’m not going to ramble on about how awesome they look, you can see for yourself.  These cards give me hope that baseball cards can be treated as something other than a commodity or a stock certificate and can be appreciated for what’s on the front, not for what Beckett says they’re worth.  These are cards as art and if our hobby is ever going to be something bigger and better than what it it we need more cards that allow us to appreciate them for art and photography and not low print runs.

Please support Left Field Cards, buy some packs.  Lets start a revolution where cards are thoughtful, well-executed, beautiful, and intrinsically valuable because of what’s printed on the front.

Musings of a Card Collector

Analyzing reality TV, and the world, at the same time