2012 Bowman Platinum, looks a lot like 2011 Bowman Platinum.  Was the product popular enough that it didn’t necessitate a new design? Doubtful.  This feels like laziness to me. 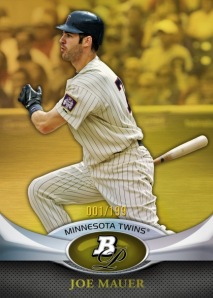 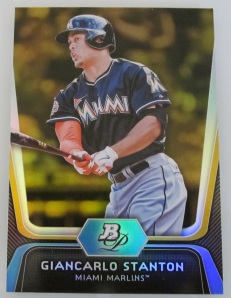 Now, I know that every set has its hallmarks.  I know that Topps wants to create brand recognition, but they have done nothing to improve upon 2011 Bowman Platinum, or 2010 for that matter.  And I’ll go on record and say that the 2011 design wasn’t anything special.  The cards are “shiny” which means they’re working from a disadvantage to begin with, then add to that awful modern, “high-end”, borders and pictures which play a secondary role, and you have a recipe for sh*t cards.  Bowman Platinum is a mid-range prospecting set, so I understand that people aren’t buying them for the design, they are buying them for the prospects, but Topps could at least take the time to make improvements and changes to make the new issue interesting.

Beyond not changing the design, Topps didn’t even both to chang the chase cards, which include different colored cards, ala the Fleer Precious Metal Gems, that are butt-ugly.  There has never been an aesthetically pleasing card, in my estimation, that takes a picture and makes the background a shiny green mess.  Bowman Platinum includes gold, emerald, and ruby cards that are inserted at various rates.

I suppose calling those “chase” cards may be an over-statement, especially when people who buy Platinum are doing it for the prospects.  Topps satiates this need by falling back on their Prospects insert set and prospect autographs.  However, in this way, Platinum necessarily takes a step back from last year.  Last year was Harper-mania, this year is Trout-mania.  2011 Platinum included a bunch of interesting Harper related chase cards.  2012 Platinum includes Trout cards and Harper cards, which are cool, but a year late.  These aren’t first time prospect cards and won’t elicit the same reaction as the Harpers did last year.  There just isn’t the same prospecting class this year as there was last year.  Though you never know who will take off and become a star, so maybe I’ll eat my words in five years.

I purchased a $10 value pack of Platinum at Target.  It included three packs and a special pack with purple prospect cards.  The pack is a good deal, even if I’m not a huge fan of the product.  As mentioned herein the design is similar to last year, so if you liked last years design, you’ll like this years.  I see no reason to get into it any further than that.  I pulled a gold Mike (ahem…Giancarlo) Stanton card and a Miguel Sano Prospect refractor.  Interestingly, all the cards in this years set are refractors, so the non-colored refractors have this interesting texture on the cards.  It is kind of a rough texture and is a bit distracting.  If Topps wants to go all refractors that is fine, but at that point just use colors to differentiate because the texture bit is not good design.  (Sano is a solid prospect, so this card, despite its odd texture, may have been my best pull, only time will tell).  The purple cards are dreck, but maybe at some point one of the prospects will be the next Derek Jeter and then I’ll get all excited about my purple card.  Maybe. 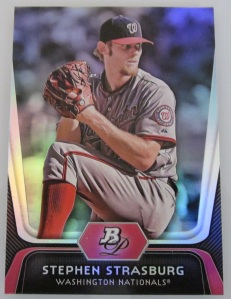 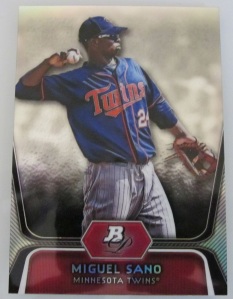 It might be hard to tell, but it’s bumpy. Bumpy is not the best texture. 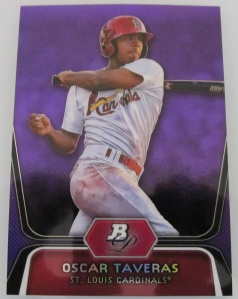 Overall, Platinum is exactly the same product as last year but with a less exciting prospecting class.  The autographs are the main draw (see checklist), so I’d suggest buying a box if you’re interested, buying packs is not likely to net you with anything other than some base cards and a few parallels. If you have the money it’s probably worth waiting for Sterling and if you don’t have the money I’d still recommend waiting for Draft Picks and Prospects.  Either one of those products will offer the same prospecting fun, but with the added benefit of getting a true high end card or a true first professional card, respectively.  Platinum, as a mid-range, mid-season, product just doesn’t hold a candle in any regard to the other Bowman products.  Grade: 2.5/5

Musings of a Card Collector

Analyzing reality TV, and the world, at the same time